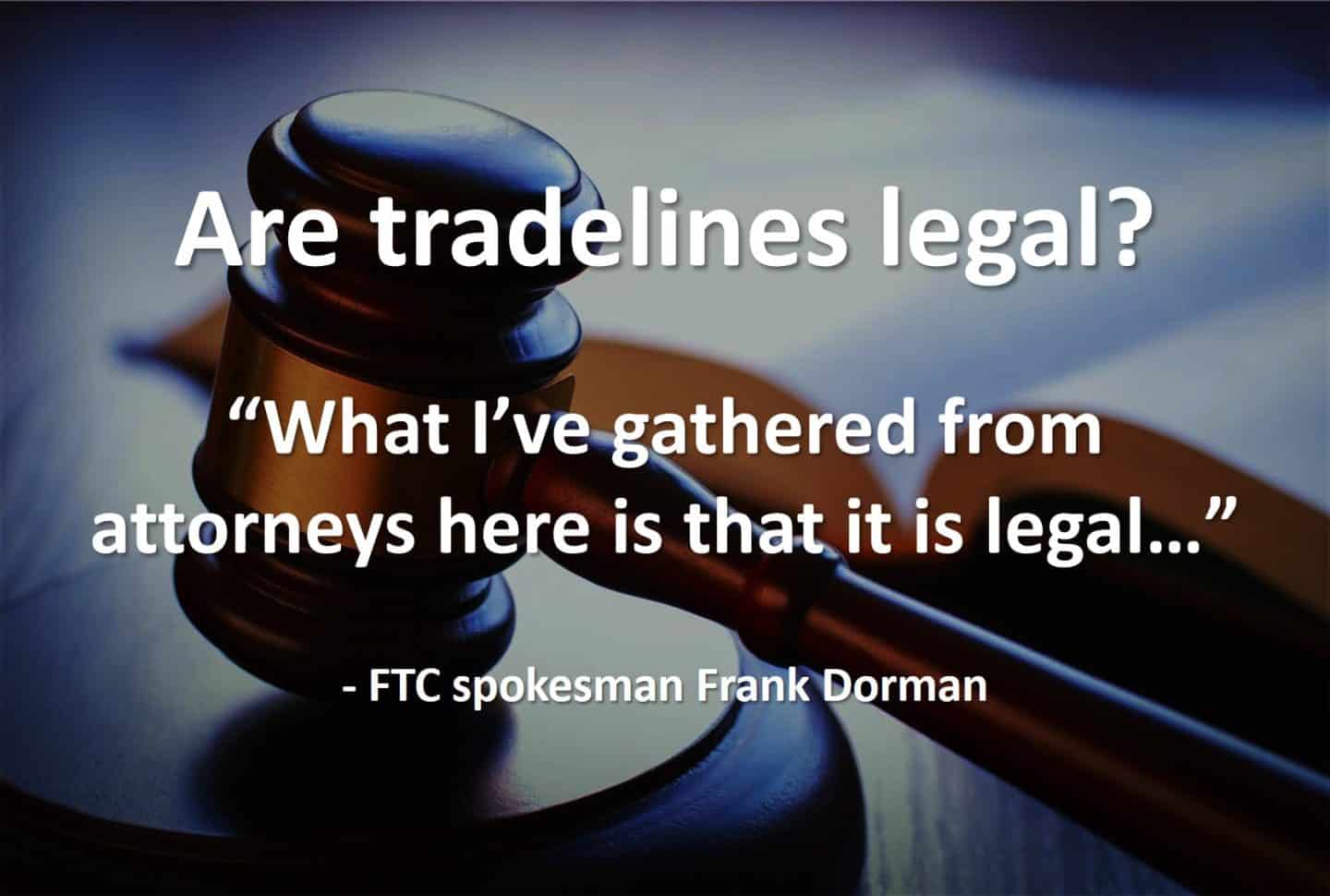 Are tradelines legal or illegal? Moral or immoral? The internet suggests that it is a well-settled principle that adding authorized user tradelines to your credit report to help boost your score isn’t illegal.  You can search for “are tradelines legal” and find many opinions.

We are not giving legal advice, but merely pointing out the consensus on the internet.  Even an FTC spokesman Frank Dorman said:  “What I’ve gathered from attorneys here is that it is legal, however, the agency is not saying that it is legal technically.”

A company selling the tradelines could violate the Credit Repair Organization Act by demanding upfront fees, for example.  However, that doesn’t speak to the legality of adding authorized user tradelines.

Fair Isaac Corp., creator of the well-known FICO credit score, had announced last year it would end the practice…” of piggybacking “…but during Congressional testimony Tuesday, acknowledged it had changed its mind “

After consulting with the Federal Reserve Board and the Federal Trade Commission earlier this year, Fair Isaac has decided to include consideration of authorized user trade lines present on the credit report

This is possible because creditors generally have followed a practice of furnishing to credit bureaus information about all authorized users, whether or not the authorized user is a spouse, without indicating which authorized users are spouses and which are not.  This practice does not violate Reg. B

– Robert B. Avery, Kenneth P. Brevoort, and Glenn B. Canner

This is where the concept starts to cause friction on the opinion-net.  People often make good cases for and against the morality of the practice.  Of course, the main point is that you are manipulating the credit system.

This seemingly sensible contention is the focus of this blog.  The manipulation argument, as we call it, presupposes that the credit system is flawless, or even functional, in the first place… In fact, it is a made-up system by a private corporation; it’s not divine.

More importantly, it is this imperfect system that scores authorized user tradelines in their scoring model and it is the law that allows it. What is left to argue?

“Joe” lost his job and fell behind on some payments.  Under the new FICO model, called FICO ’08, credit scores are hurt the most by recent late payments.

A few months later, Joe got a new job making 6 figures.  His ability to repay a loan obviously increased and his risk of default dramatically decreased.

However, the FICO model, or any model for that matter, does not take this significant fact into consideration.  Now Joe is left with poor credit and a 6 figures salary.

Not only is Joe suffering, but so is the economy.  A flawed credit system prevented a consumer from purchasing a product.

…yet, the credit bureaus and credit scoring companies got their money when Joe’s credit was pulled.

Secondly, the credit bureaus and credit scoring companies are simply one thing… companies.  They are private corporations, who stand to financially benefit by judging you.  Their job is to appeal to creditors and provide an alleged risk assessment of you.  This is supposed to allow creditors to lend at lower risks of default.

Did you notice that I didn’t say that their job was to ensure that your credit file is accurate?

So, are tradelines legal or not?

This is a question for the lawyers, not the internet.

Are tradelines moral?  The answer is really up to you.

Ideological positions can certainly change.  However, the impact that tradelines can have on your credit score is undeniable.

If you are looking to boost your score quickly, you should consider buying tradelines.  Here at Superior Tradelines, LLC, we will help determine if you are in a position to benefit from adding seasoned tradelines.

37 thoughts on “Are tradelines legal or illegal? Moral or immoral?”