Home » Blog » News » Ultra FICO score and Tradelines: Everything you need to know. 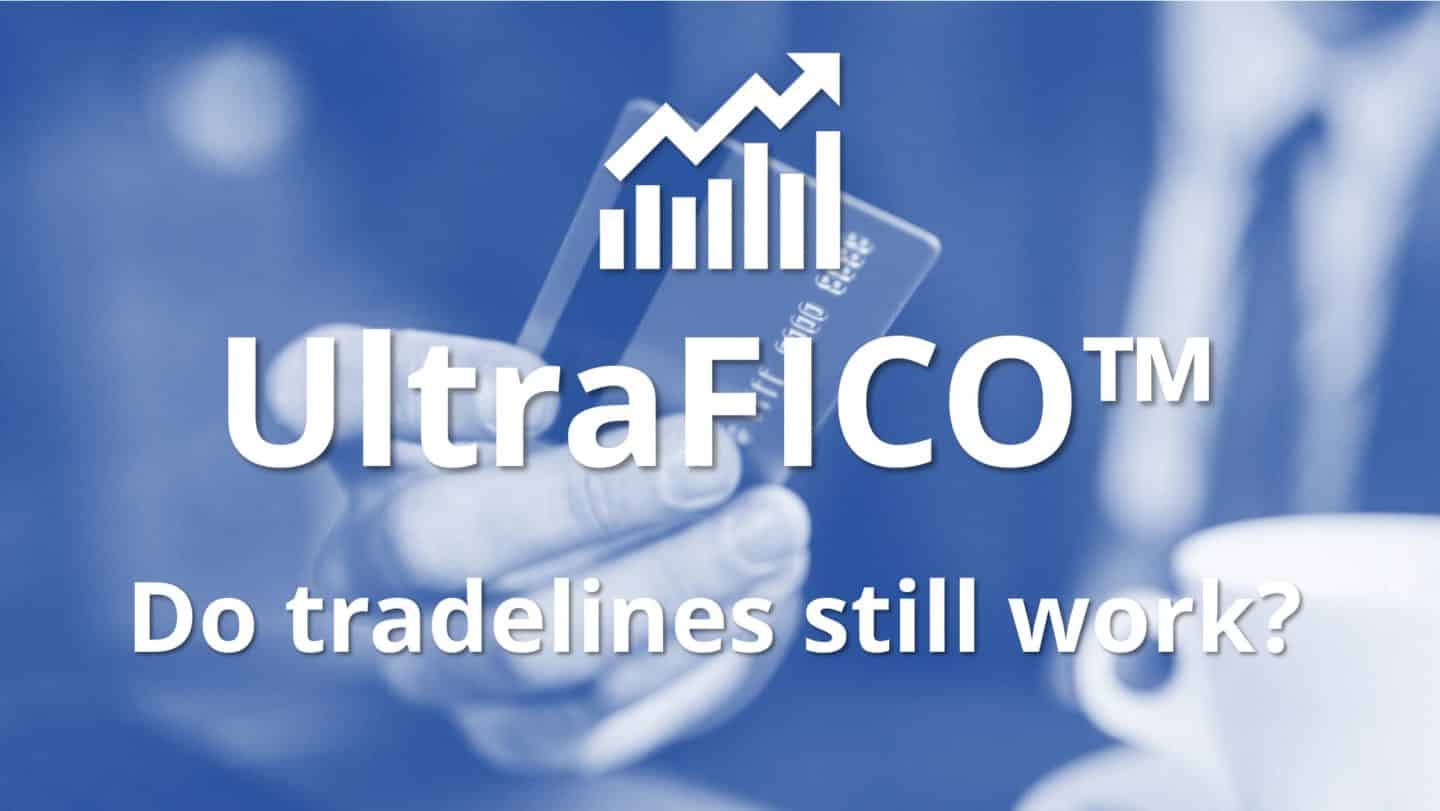 What is the ultra fico score?

Ultra FICO is a credit scoring model by Fair Issac Corporation. This model will include your checking, savings, and money market accounts into your overall risk. Or, as FICO put it:

“…you are empowered to enhance your score by leveraging checking and savings account data in the score you build [and] lets you show lenders indicators of responsible financial behavior, not visible on a traditional credit report.”

This is probably true. Indeed, if they have more information on you and your financial behavior, FICO is certainly better positioned to evaluate your credit risk. The new product has received rave reviews from industry-related publications. 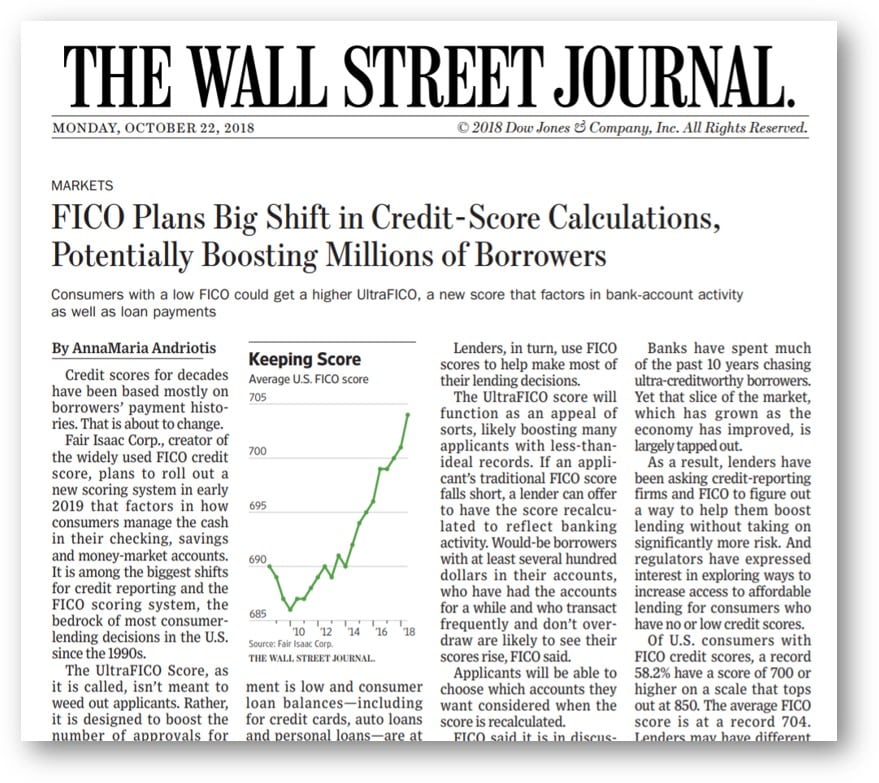 The truth is that the “Ultra FICO” score is in part a marketing gimmick and in part an entrance to the 20th century. Ultra FICO may or may not boost your credit score. Ultra FICO will have no impact on whether buying authorized user tradelines will continue to increase your credit score. The new score could frustrate lenders and cause litigation.

Ultra FICO is in part a marketing gimmick.

Whether we think the Ultra FICO score is a good idea or not, the marketing behind the “Ultra” FICO score is pure genius. Here are a few stats to compare.

The trends speak for themselves; the spike below is the introduction of their new product.

Now, just because this was a clever marketing gimmick does not discredit the product. So, let’s discuss that.

The Ultra FICO score is in part an entrance to the 20th century.

Yes, I know we’re in the 21st century. I meant that FICO is entering into the 20th century. I say this because even 100 years ago, banking information was a relevant factor in someone’s ability to repay, and, therefore, their creditworthiness. The “Ultra FICO” scoring model is not a sign of revolutionary thinking on FICO’s behalf. The “Ultra FICO” score is evidence that FICO’s scoring model was a dinosaur. Not to toot our own horn (okay, maybe a little to toot our own horn), but, 8 years ago (on March 1, 2013), we observed the exact problem they’re trying to fix. In a hypothetical example on a tradelines post, we said:

“Joe” lost his job and fell behind on some payments.  Under the new FICO model, called FICO ’08, credit scores are hurt the most by recent late payments.  A few months later, Joe got a new job making 6 figures.  His ability to repay a loan obviously increased and his risk of default dramatically decreased.  However, the FICO model, or any model for that matter, does not take this significant fact into consideration.  Now Joe is left with poor credit and a 6 figures salary. Not only is Joe suffering, but so is the economy. A flawed credit system prevented a consumer from purchasing a product.  The real estate agent loses. The loan officer loses. The banks lose.

The fact that FICO (or any scoring model) has not previously considered one’s ability to pay in their risk model is embarrassing. Yes, FICO’s the billion-dollar company, not us. But, sheesh… this seems like a pretty significant oversight.

Ultra FICO may or may not boost your credit score.

“By simply and securely linking with your checking, savings or money market accounts, your UltraFICO™ Score enhances your credit score based on indicators of responsible financial behavior.”

This, in fact, does not mean your credit score will increase. It means FICO will have more information on you, for better or for worse. The assumption is: If I give them my information, they will raise my score. Nope. Clearly, if your balances or other behaviors are not to their liking, they’re going to decrease your score.

This is likely to lead to big data in credit scores. If you are out late on Sunday drinking at a bar (they’ll know because they’ll see the round of shots you bought as a transaction on the account you have synced with them), will they determine that you don’t take your Monday-through-Friday-9-to-5 job seriously? If so, will your credit score decrease?

Will tradelines still work with the Ultra FICO?

Now, the moment you’ve all been waiting for. Will Ultra FICO continue to consider authorized user and allow piggybacking credit to increase credit scores when you buy tradelines?

As of right now, there’s no reason to believe otherwise. Here’s why:

In the first place, the Ultra FICO score does not currently exist. It’s in testing and not available to consumers or lenders, other than it’s pilot program. Fico.com specifically provides:

“If you are interested in getting your UltraFICO™ Score when it becomes available please complete the form to receive news and updates.”

In the second place, the Ultra FICO score changes nothing. Instead, it adds something. Meaning, it isn’t intended to be a recalculation of your current credit score under previous FICO models. Rather, it is intended to include checking account and savings account information in your credit score. As previously mentioned in other posts, FICO declared that:

“… authorized user tradelines are considered by FICO® Score 9 and all prior versions of the FICO® Score.”

Adding banking information would not change that fact.

The new score could frustrate lenders and cause litigation.

The new score is taking a dangerous step. This request for data is blurring the lines between a “risk” model and lender underwriting. This could potentially frustrate lenders. Also, FICO is taking a step toward becoming a depository of information, like a consumer reporting agency. This will bring forth massive regulation from FCRA, FACT ACT, etc. Not to mention responsibility for private financial records. Finally, we predict that FICO will be sued for discrimination. It’s one thing to underwrite and match the size of a loan to someone’s financial wherewithal; it’s another thing to imply someone with a small savings account is somehow less credit-worthy than someone with a big one. Going from an algorithm-based company to big regulated data? It’s a pretty risky move. Get it? See what I did there?

Ultra FICO is nothing yet… but could be something in the future. It currently has no impact on whether or not your credit score will increase if you buy and add authorized user tradelines to your credit report. Lenders are typically 4 to 6 years behind on updating to new scoring models. So, we’re half a decade away from seeing any meaningful impact from Ultra FICO and tradelines.