It is possible to share credit with others and to get paid for it; Piggybacking credit is a thriving industry.

The sharing community is here to stay. And, it’s likely to get bigger as it expands to more and more industries. But, surely there are some limits. Take one’s personal credit, for instance. Could you imagine an industry in which parties are connected through a broker to share their credit? Well, imagine no more… it’s real.

And, as crazy as it sounds, it’s a fairly common practice which has been around for decades.

Then again, it was crazy to hitchhike 10 years ago. Now, we have Uber, a digital thumbs up and a perfect stranger snatches you up in their vehicle. Uber is on-demand transportation. Likewise, Superior tradelines is an on-demand credit boost. But, how?

A spousal authorized user is where it began.

In order to understand it, let’s take a few steps back. In your credit report, you have accounts (like credit cards, mortgages, auto loans etc.). Those accounts are called “tradelines.” You may have heard of co-signing, but there’s something else called “authorized users.”

Unlike a co-signer, the owner of a credit card can add anyone else as an authorized user to that account.

In other words, when the account (or tradeline) added is superior to the accounts already on the authorized user’s credit report, the score can increase. This is where the term originated. 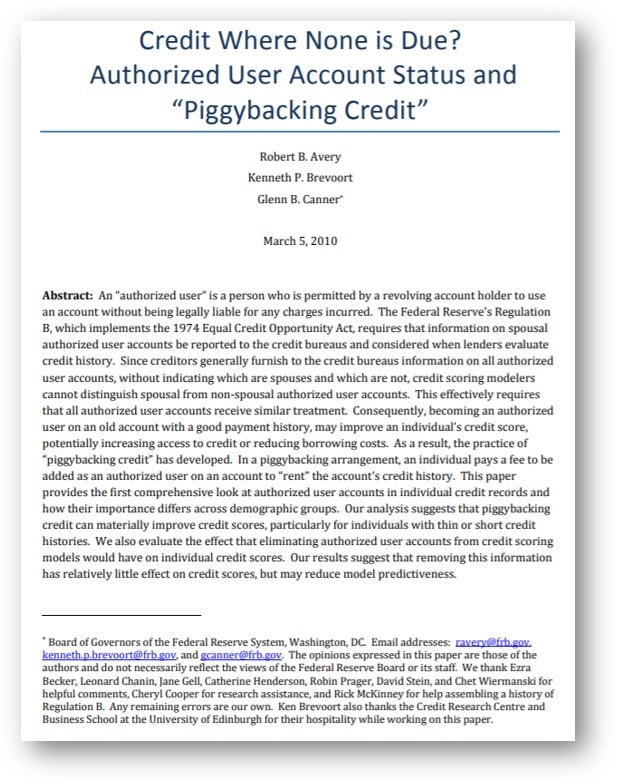 In other words, you could add a perfect stranger to your credit card as an authorized user for the purpose of increasing their credit scores. As you can imagine, this is a value to the authorized user. As such, the practice of piggybacking credit was commercialized.

There are companies which broker the relationship between those with good credit and those who need it. The transaction is relatively simple for the consumer and the credit “donor.”

Staying in the lane.

Sorry for the continual “Uber” puns, but in the case of piggybacking credit, there are lanes, legally. The entire practice is based on the law. It is recognized as legal. However, legal things are used illegally all the time.

Ultimately, piggybacking credit is an amazing tool. Because laws allow it and because it is commercialized, you could share credit with others or benefit from someone sharing their credit with you.

Buying tradelines is one of those industries where all parties involved benefit from each other and not at the expense of each other.

The sharing community is here. Credit sharing joined that club.