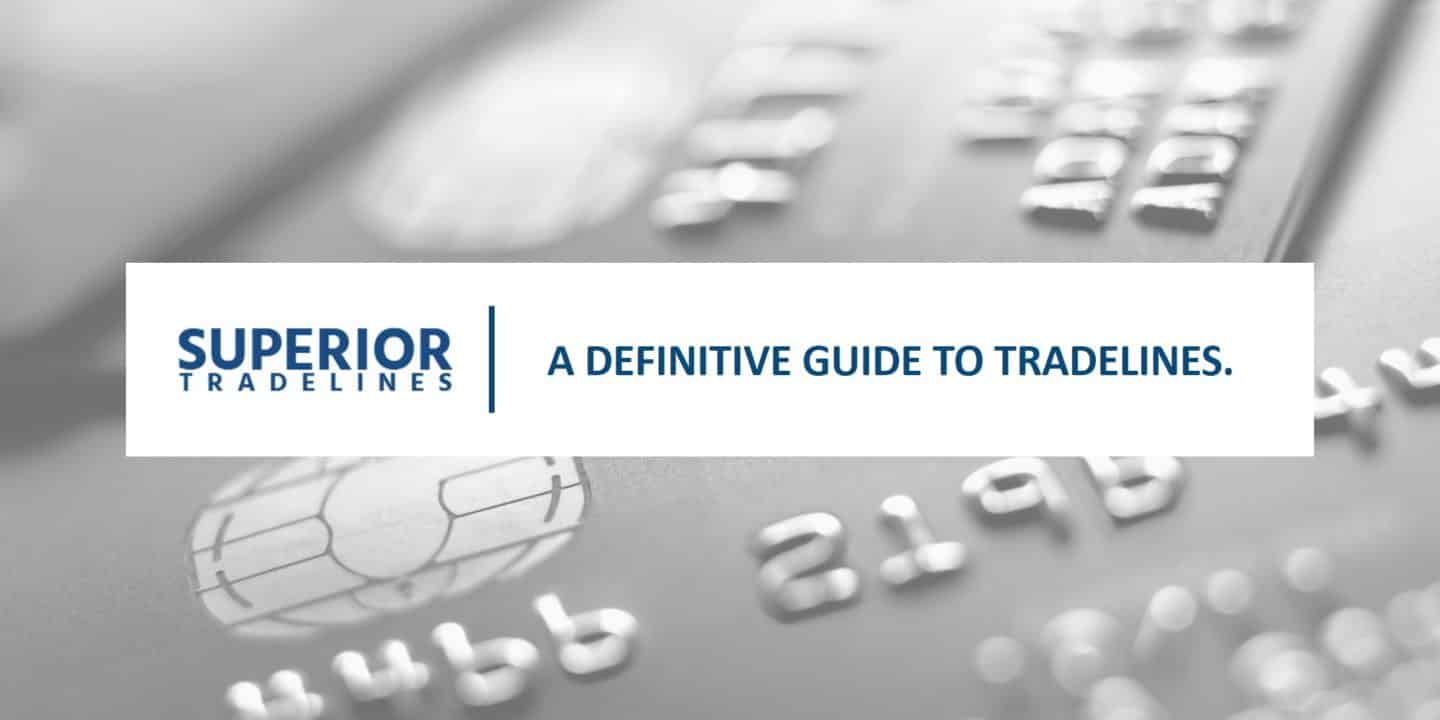 Tradelines? Authorized user accounts? Piggybacking credit? You know the terms and buzzwords. You spent hours, days or even weeks or month searching for “tradelines,” “tradelines for sale” or the like. You’ve found inconsistencies, incomplete information, among other problems. Wouldn’t be nice to have one single page of information that gave you the information you were looking for? Well, that’s what this page is about. While our website contains more information than all of our competitors combined, we recognize that the information is broken up into Videos, FAQs, Blog Posts, etc. It’s all there, but you’d take a while to digest it. This page, on the other hand, is intended to be a tradelines guide or a running list of information you need to know.

If you’re asking yourself “what are tradelines?” then this page is a good place to start. Here’s the quickest, most down to earth answer possible: tradelines are accounts in credit reports.

If you don’t have years to wait to build a credit score, what can you do? Well, you can buy tradelines by paying to be added as an authorized user to a pre-existing revolving (credit card) line of credit. You, the “authorized user,” inherit the payment history and characteristics associated with that account. If that account is in good standing, your credit score will reflect that information and your credit score could see a significant increase. 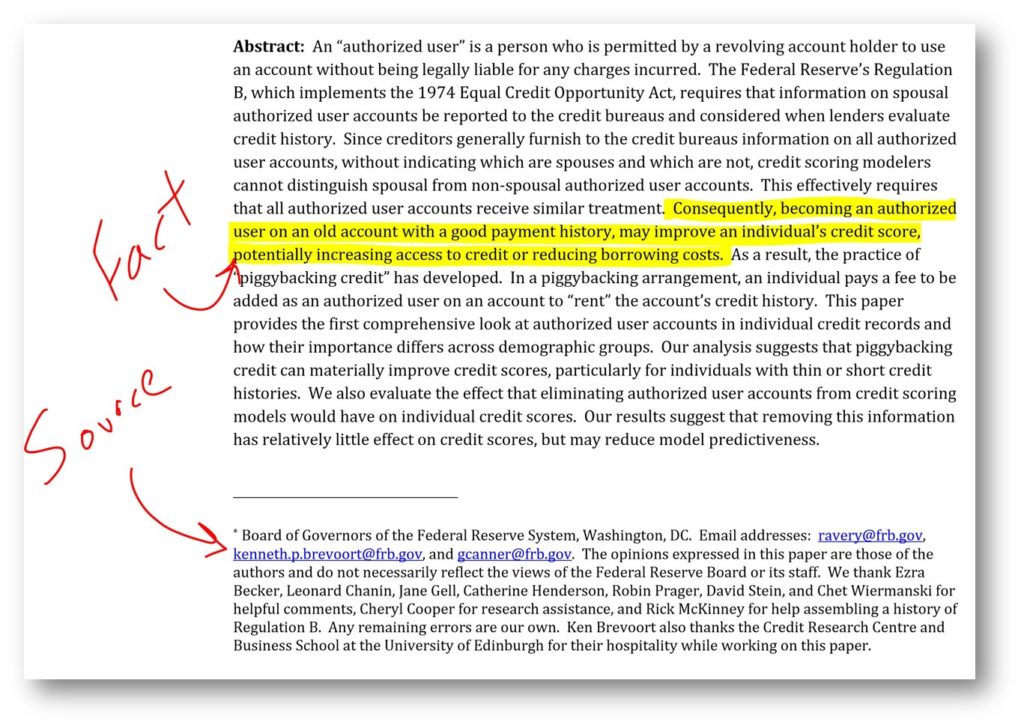 Should you buy tradelines? If not, we’ll tell you…

Before we get into some of the more nitty-gritty, you should stop and consider whether you need tradelines at all. Or, if you do need them, whether they’d work at all, given your particular credit situation. Here’s something you need to know: tradeline companies have not become more prevalent, but more people are selling tradelines. Why did I say it this way? Because people have jumped on the band-wagon after a select for companies have perfected the industry (like us if you don’t mind a quick toot of our horn). You have other websites popping up all over the place and these “companies” are willing to sell tradelines to anyone for any price, regardless of the impact it will have.

We won’t sell to anyone and everyone.

Here’s why: If tradelines don’t work for you, you’re going to be angry, want a refund and we will all have wasted our time. We can’t close our doors and popup with a new website tomorrow, because we’re a legitimate company with an established history in the marketplace. Instead, we want to do a good job. In order to do a good job, we have to look to the future and determine whether tradelines are going to help you. If we believe tradelines are not going to help you, we’re going to tell you that so as to not waste your time and our time. In fact, we make credit repair recommendations quite often. As we explained in our “what to expect” page, we break down credit situations into four categories:

If you want to know how we come to these conclusions, we can go over a credit report analysis together with you, but suffice it to say we evaluate the amount and recency of negative information in your credit report compared to the positive information and make an informed decision (based on previous client results) whether or not we believe tradelines will help you achieve your stated credit goal.

What’s the difference between tradelines and tradelines?

Huh? Well, the question isn’t real, but it accurately represents some of the confusion that exists with tradeline terms and phrases. The root term is “tradelines,” and there are things added to it. In essence, there are only two differences: authorized user tradelines and primary tradelines.

All of the following terms are the same exact thing; they’re all “authorized user” accounts:

…those are literally all the same thing; they’re synonyms.

NOTE: Everything with the word “primary” has nothing to do with authorized user accounts and any implication that you can buy primary accounts like you can buy seasoned tradelines is a lie.

I guess the next topic should be legal…

Are tradelines legal? We wrote multiple articles on this, so rather than copy and paste, I’ll just screen grab the best portion of one of the best articles. Here goes: 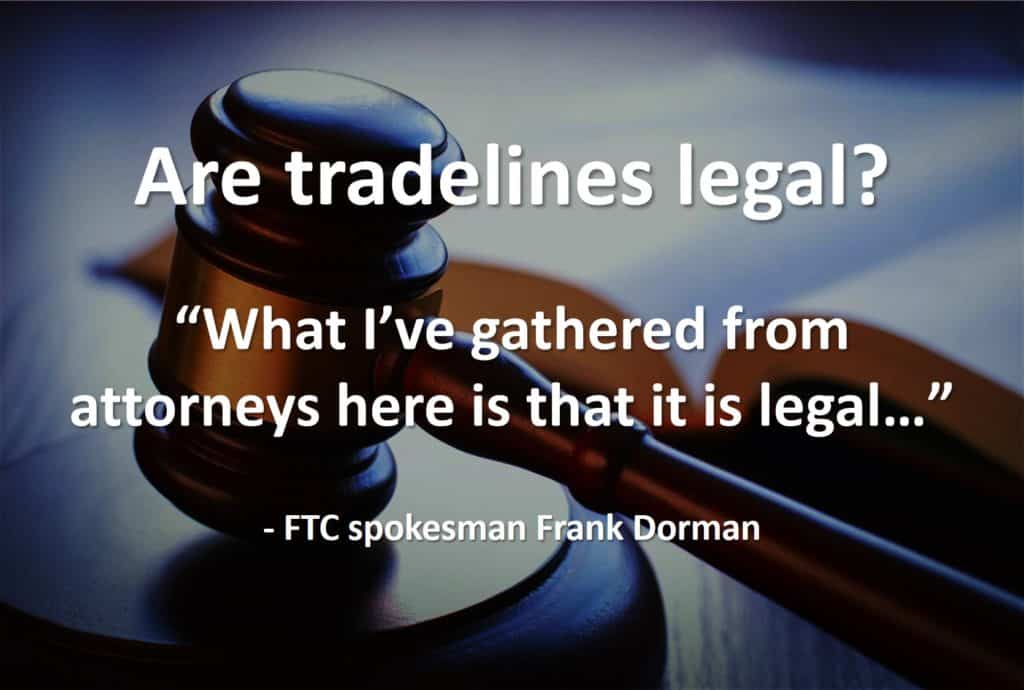 Anything can be abused, so tradelines could be illegal if they were used fraudulently. Being added as an authorized user is perfectly legal. Whether you do crazy stuff like credit profile numbers… well, that’s another story. So, speaking of…

CPNs are garbage. Just stop before you begin.

There’s a malignant misconception of an obscure law which has resulted in the misguided belief that you can create a new 9 digit number, like a social security number, for credit reporting purposes. This is a form of fraud called synthetic identities, which the federal government actively and regularly prosecutes. We’ve already been through every argument for and against CPNs known to man, so we’ll end the diatribe, here.

Free tradelines exist, but they may not have worth.

Not only can get you tradelines for free, but you should try to do this before you buy them. However, there’s a bit of caution you should consider. Adding tradelines isn’t magic; it’s not as simple as “current credit + tradelines = good score.” In fact, you could hurt your score if you added an inappropriate tradeline (such as something that places you in a different scorecard and makes your okay credit look bad, which is too much to explain here). Nevertheless, if you have a friend or family willing to add you as an authorized user, you should consider that option, for sure. But, you would be served well by connecting with us and getting a free credit report analysis. This way, you’ll know for sure whether your “free” option has any worth.

Tradelines cost what they cost…because there are costs.

People constantly ask “how much do tradelines costs?” But, tradelines don’t really cost anything. The cost stems from the human time involved in arranging to have you listed as an authorized user. Companies cost money to register, there are phone bills, internet, website and development, power, training, planning, etc. Then, the primary account holders who will add you? Well, they have to communicate, they have to take there time, they have to have internet, etc. In short, there are costs involved any time you attempt to coordinate human beings to do anything. So, the question isn’t “how much do tradelines cost?” Rather, the question is “how much will I have to pay to find legitimate advice and coordinate the appropriate people to have me added as an authorized user?” If someone is charging less than $500.00 per line, you should ask yourself what they’re missing.

It’s important to do it right if you want your credit score to increase.

Among the first questions people ask about tradelines is “how much will my score increase after adding tradelines?” It’s certainly a reasonable question, but if I lined up 100 different clients, I’d have 100 different answers. Credit is unique. Tradelines are unique. So, the result of mixing the two is also unique. If you want to know, you need to connect with us and we can do a credit report analysis. But, we wouldn’t be able to predict a per-point increase. That’s incredibly difficult, if not impossible. Since people persist with this inquiry, we did find a source that provided a per-point increase estimated based on a significant study.

Our study found that the impact of the tradeline depends entirely on what is on your report.

We also performed a study that examined over 850 participants that purchased tradelines. The highest increase we saw was adding 750-ish points, and we actually saw some clients that had their score decrease despite the tradeline. That’s a pretty wide range because the impact of the tradeline depends entirely on what is on the reports. If you want to look at the specific analyses we ran, you can find out whether or not tradelines are right for you based on what is already on your credit report.

How do you get started?

We will perform a credit report analysis and provide a recommendation.

Tradelines listed here are publically available. A majority are unpublished and reserved for affiliates and may also be available to you, so please ask if you don't see what you need. All tradelines listed have a balance below 10% (unless otherwise notified). Prices are subject to change without notice.
Tags List Tradelines

2 thoughts on “Tradelines | A guide for buyers”