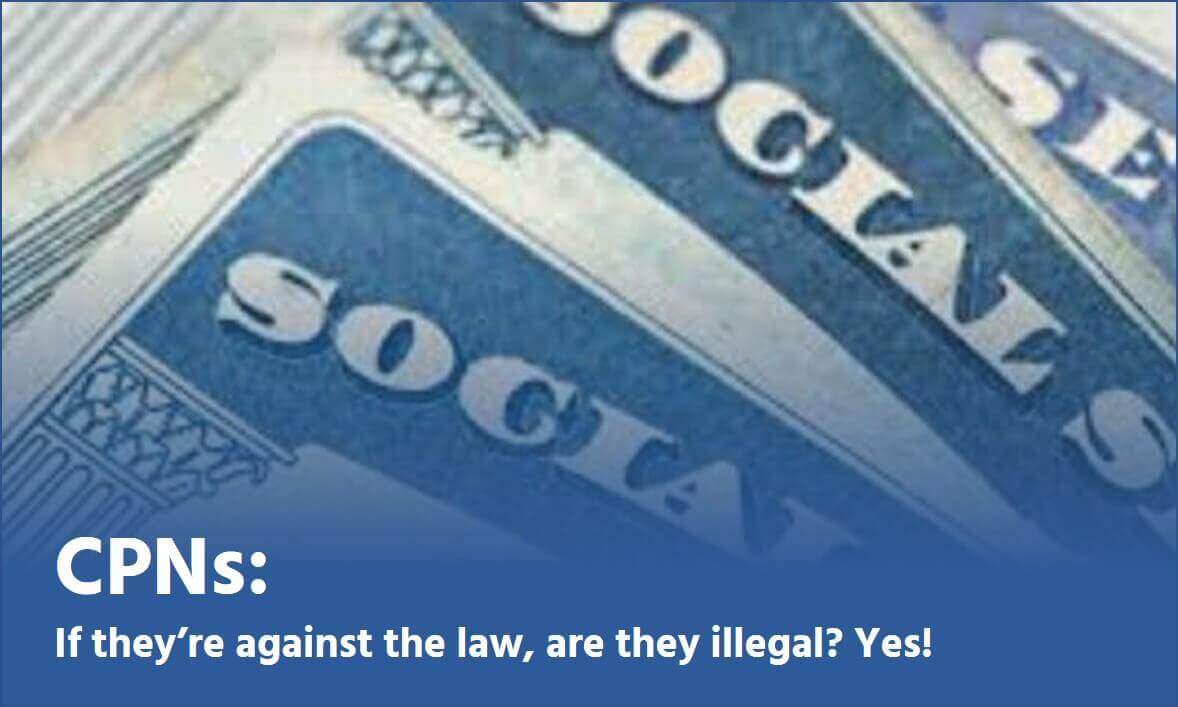 Whether you add tradelines to a social security number or a credit profile number is a heavily debated topic. If you thought about purchasing or have purchased a credit profile number (CPN), you need to read this page. The same goes if you have no clue what I am talking about right now. Congress recently passed a law making this illegal. Here’s a quote from the press:

In a rather strange shift of priorities from economics, foreign war, health-care and the like, today the Senate passed a bill, S.B. 497, which was subsequently signed into law by President Barack Obama. The bill puts an end to credit file segregation through credit profile numbers and forces individuals to use only their current social security number for credit and tax purposes. In addition, those who currently possess a credit profile number may face criminal prosecution.

Okay, so that isn’t true. I made it all up. And, you’re probably mad, right? Well, I did it to prove a point and I am, in fact, going to tell you the truth. But let me ask, why aren’t you mad at those lying to you about the existence of credit profile numbers? I am trying to help you with free information, while they want to take your money and set you up for failure simultaneously.

Were you concerned and bummed out by the fake news article above? Then let me ask you this: why aren’t you concerned with a lack of text that excites you about CPNs? Meaning, this mythical creature called the Credit Profile Number or CPN, sounds great right? Have you ever noticed that there isn’t one word proving its existence? I challenge you… go find the law that allows you to use a second credit number for individual credit.

You weren’t scammed… the person who “helped” you was clueless.

I think a small percentage of people pushing CPNs are scammers. To fully understand that credit profile numbers are fake takes a bit of time and energy on research. I think the majority of people selling CPNs probably believe the nonsense they regurgitate. For people like this, there is no malicious intent, only negligently passing along incorrect information.

I want you to click play on the video clip below. If you find this gentleman authoritative, then there’s nothing I can do to convince you otherwise. I encourage you to read the comments section of this post for the arguments for and against CPNs.

What’s worse than this video and the horrible information in it, is that of the comments below it where people ask for his contact information. Are we that gone as a society? Do we not recognize that this man is obviously misinformed? SIDE NOTE: If he’s smart enough to dig through the CPN craziness, he’s smart enough to be productive in another field. Let’s wish him luck.

CPNs are illegal and they’ve always been illegal.

If CPN were legal, why would bankruptcy, and credit consolidation exist?

This is an excellent point. You’ve noticed that I have skipped over the obvious “ineffective” portion of my credit profile tirade? I’m just going for the jugular… they’re illegal. I figured without the possibility of going to jail, people might say “Eh… might as well try it.”. So, skipping the fact that CPNs don’t work in the first place, I’ll move on to the fact that they are illegal and the FTC has been charging people since 1999. Okay, so this article excerpt is real and you can click on the link in the previous sentence to see it:

Down from my soapbox, but please listen.

This was a harsh post about a ridiculous topic. We, at Superior Tradelines, are frustrated with CPNs, because we have to talk people down from it constantly. The CPN nonsense is poisoning your brain and your chance of credit success. The bottom line is that credit profile numbers have never been an option for credit enhancement… ever. And, they are not an option today. Please stay away from CPNs for your sake. In addition to this process NOT working, you may end up as a respondent on a Federal Trade Commission complaint or a defendant on a Department of Justice indictment. Or, you will just waste a lot of money and get nothing in return.

If you want a legal opinion about CPNs, you need to read the post “The Credit Profile Number Scam” by Attorney Mark Bennett, who has many years of experience in criminal defense and argued before the Supreme Court of Texas.

If nothing so far has convinced you, ask yourself this: Why would Superior Tradelines sabotage themselves with this post when they could make a lot of money selling CPNs? Further, if you’re not convinced and think you have a good argument for CPNs, let us know in the comments below!