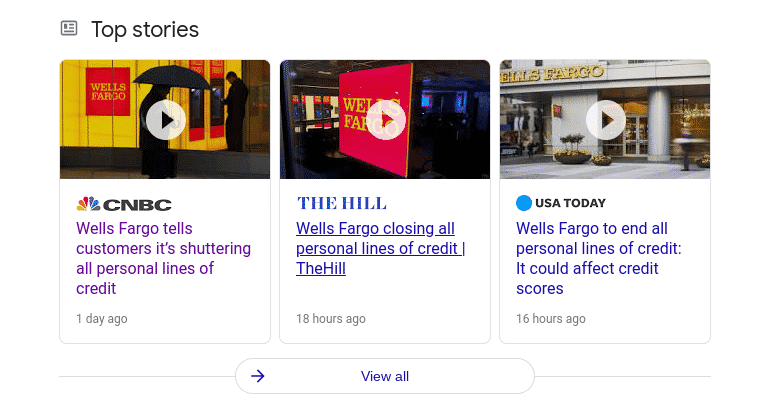 Wells Fargo has decided to close its entire consumer offerings of lines of credit. This includes closing down pre-existing lines of credit (not just discontinuing it for new customers).

In effect, they are decreasing consumers’ credit scores, which is the real scandal.

However, you should know, Wells Fargo is no stranger to scandals.

If you recall, Wells Fargo created millions of fake accounts on behalf of their clients resulting in millions of dollars in fines and damages in the billions.

More recently, Wells Fargo agreed to pay 3 billion dollars to settle charges alleging that it engaged in fraudulent activity, including charging fees and selling products its consumer did not want and did not need.

Ethan Wolff-Mann at Yahoo Finance did a chronological expose in Wells Fargo’s transgressions, detailing the following:

Now this: Closing lines of credit and hurting credit scores.

As a matter of fact, Wells Fargo’s decision to close consumer’s lines of credit is a prime example of how a consumer’s credit score can be negatively affected while having nothing to do with the consumer’s creditworthiness or willingness or ability to repay a loan.

Everyone knows that closing a line of credit can negatively impact your credit score.

Why? For the very reason that it could decrease your credit score.

Likewise, TransUnion, one of the “big three” credit bureaus, warns that closing an account may harm your credit score. Experian said the same. Everyone agrees.

Bankrate outlined many ways in which a decreased credit score can negatively impact your life.

With a lower credit score:

If you were negatively impacted by Wells Fargo’s decision to close your line of credit and you do not have an immediate credit-related goal, you’ll probably be just fine.

In general, you will build credit over time. Then, by the time you need credit, you will be back on your feet in terms of credit.

In fact, you should educate yourself on this matter prior to engaging in tradelines. You can read our 24-page study to learn whether you can expect positive results or not.